Efstratios Grivas was born in Egio, Achaia, on March 30th 1966. He grew up in Athens, in the neighbourhood of Kallithea, as his family moved to the Greek capital in 1970. His registration at the Kallithea Chess Club in 1979 was his first contact with chess. His chess evolution was immediate and rapid, as only two years later he won the Greek Cadet Championship, under the coaching guidance of FM Panagiotis Drepaniotis (1979-1981). It immediately became clear that he was a very talented young chessplayer, capable of great achievements in his chosen sport.

Efstratios Grivas in his own words

“I used to play chess a lot in my younger years achieving my piece of success in the chess community. Nowadays it is not the same anymore as I have stopped playing professionally for about 10 years already. In this past period I worked for about three years in the stock market and then I decided that I could start a carrier in the chess training and writing field.”

“I cooperated with many players of various strengths and with the Greek and Turkish Chess Federations. At this moment I occupy the position of the Head Trainer of the National Men Team of Turkey and I am spending about a weak per month in this country.” 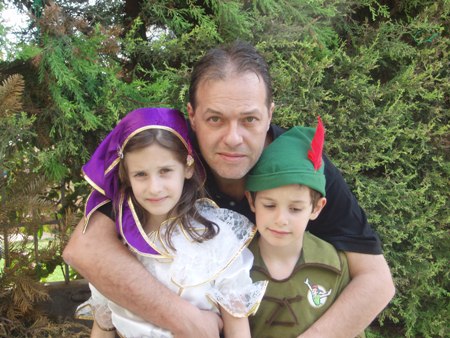 Efstratios with his children Katerina and Michalis

“Of course I am writing a lot, having already published 7 books in the English language and I am cooperating in a regular base with the most important world chess publications. All the above means that I am still spending at least half of my life around chess and that’s probably the best I can do as the other half is already dedicated to my wife and my two beautiful children!”

More about his competitive chess career

The course of Efstratios Grivas’ chess career fulfilled expectations as, under the guidance of his trainers IM Dr.Nikolai Minev (1981-1982), FM Michalis Kaloskambis (1984-1986), GM Efim Geller (1987-1988) and IM Nikolai Andrianov (1990-1996), he conquered all (Greek and International) titles awarded by the Greek Chess Federation and the International Chess Federation (FIDE). A significant role in his development was played by the training he received in Moscow in 1984 by outstanding members of the chess world. 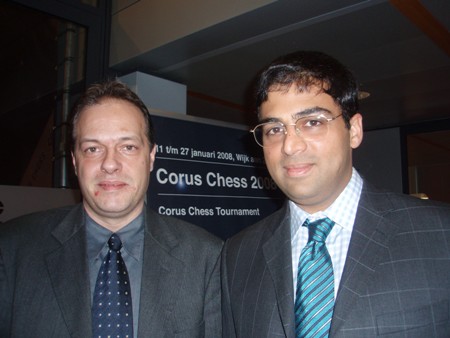 During his competitive activity Efstratios Grivas emerged victorious at least once in each of the categories of the Greek Championships in which he participated, and also won several individual and team medals in Balkaniads, Acropolis international tournaments etc. His greatest success was winning the Silver Individual Medal (on the 3rd board) in the 33rd Chess Olympiad in 1998; this remains the only Olympic medal Greece has ever won to this day. Other important successes were the Gold Individual Medal (on the 3rd board) in the European Team Championship in 1989, 4th place in the World Junior Championship in 1985, 1st place in the 1987 Munich international tournament (320 participants), 11th individual place (on the 4th board) in the 32nd Chess Olympiad in 1996, qualification of his club (OAA “Iraklion”) to Europe’s best 16 clubs in 1997 (European Club Cup) and several good placements in international tournaments: 3rd in Paris 1982, 1st in Cap d’Agde 1983, 2nd in Karditsa 1984, 3rd in Bucharest 1984, 2nd in Strasbourg 1985, 2nd in Munich 1986, 3rd in Xanthi 1991, 2nd in Gausdal 1993, 3rd in Reykjavik 1994, 2nd in Limassol 1997, 1st in Hellexpo-Sportexpo 2001, 1st in the inaugural Greek Internet Championship in 2002 (chess.gr) and others. In 1996 he was voted chessplayer of the year in the first Greek Chess Media poll.

Efstratios Grivas has also pursued a multitude of other activities:

Author: From 1982 on he successfully worked as a journalist in newspapers and magazines (in Greek and in English). Between January 1992 and September 1999 he was editor-in-chief and main contributor of the monthly magazine of the Greek Chess Federation, Greek Chess. Moreover, from 1984 to this day he has written 42 chess books, essays and studies (in Greek and in English), that are used as the basis for the chess improvement of hundreds of young chessplayers.

Administrator – Organizer: He was a founding member of the Association of Top Greek Chessplayers (1995) and has since been a member of its Policy Board (Executive Secretary 1996-1997 and Vice-President since 1998). From 1996 until 1999 he held the position of Greek Chess Federation Technical Advisor, his main duties including the Competition Calendar (scheduling – application), the organization of chess events of any kind and the promotion of chess all over Greece in general. Finally, he served as a member of FIDE’s Players’ Council (1998-2002). He holds the titles of FIDE International Organizer (was a co-organizer of the 1999 European Youth Championships in Litochoro Pierias with more than 1000 participants), FIDE International Arbiter and FIDE Senior Trainer, titles that are awarded according to specific requirements and are not honorary. 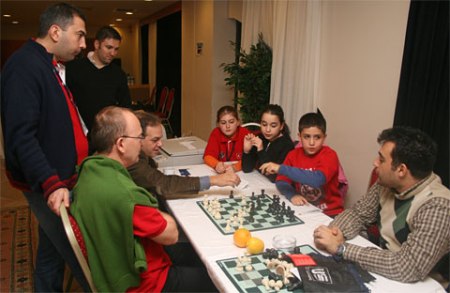 Trainer: His work in this field includes more than 5000 hours of training in many clubs, especially with younger players. From 1986 to 1991 he was the Federal Trainer of the National Juniors Team, while he has developed or greatly assisted several Greek chessplayers that today are members of the Greek National Teams, with the titles of GM and IM (and Greek Champions in their respective categories), such as Hristos Banikas, Anna-Maria Botsari, Spyridon Kapnisis, Konstantinos Moutousis, Anastasios Michailidis, Ioulia and Evanthia Makka, Andreas Tzermiadianos and others. During the period 1989-1990 he was the Trainer of the DEI Macedonia-Thrace Chess Academy, while during 1996-1998 and 2002-2004 he held the same position in Pnevmatiki Stegi Peristeriou Chess Club and finally during 2002-2005 he worked with Koropi Sports and Chess Club as well. In 2001-2002 he worked as a professor at the Institute of Professional Education in Peristeri and as External Contributor with O.E.E.K. (Sports Department – Chess Trainer Faculty) while from 2001-2004 he also offered his chess services to the Military Officers’ Academy. Since 2003 he cooperates with the Greek Chess Federation as a Federal Trainer in multiple training programs. Finally, since 2006 he also cooperates with the Turkish Chess Federation as a Federal Trainer.

Business activities: At a very young age (Thessaloniki, 1988-1990) he practiced business development and management. During 1999-2002 he was active in financial services, as he is trained and certified in subjects related to Mutual Funds, Stock Market Options and Futures and Company Internal Auditing.

A Complete Guide to the Grivas Sicilian (Gambit 2005)

This book is in every way a definitive guide: Efstratios Grivas provides the inside story on a variation of the Sicilian Defence that he has worked for more than 20 years to perfect, and which rightly bears his name. The Grivas Sicilian (1 e4 c5 2 Nf3 Nc6 3 d4 cxd4 4 Nxd4 Qb6) has proved itself sound and reliable in practice, but is also far less well investigated than most Sicilian systems. This gives it an extra sting in practice, which readers will be able to use to their advantage over the board – it is most unlikely that their opponents will have a well-worked-out response ready. The Grivas Sicilian generally leads to positions akin to the Scheveningen, but with some subtle differences. Grivas explains these subtleties at length, helping readers to exploit all their chances to seize the initiative.

Grivas provides a full and detailed repertoire for White against five important openings: the Grünfeld, King’s Indian, Benoni, Benko and Modern. In each case, he has recommended a line in which he has a wealth of experience, and has played a significant personal role in developing over many years. The recommendations are geared towards posing Black unconventional problems: your opponents will not be able to churn out lengthy memorized variations, but will need to solve problems at the board in positions that are somewhat different in character from those normally reached in these openings. Grivas has also chosen the repertoire so that it forms a seamless whole, and will fit alongside an English or Réti move-order, in addition to a standard 1 d4 repertoire.

Chess College is a new series of books to take intermediate players to new levels of chess understanding. New ideas are introduced and immediately illustrated by a number of entertaining and instructive examples, many drawn from the author’s own practice. Volume 1: Strategy introduces a variety of topics, including: “Why do we lose?”, Attack on the King, Two Bishops, Passed Pawn, Exchange Sacrifice, Positional Sacrifice, and Outpost. By drawing extensively upon his own games, Grivas is able to explain exactly what was going on over the board, and avoids the pitfall of providing overfamiliar, clichéd examples. This is part of a three-volume series that provides a wealth of instruction on many aspects of chess middlegames.

Chess College is a new series of books to take intermediate players to new levels of chess understanding. New ideas are introduced and immediately illustrated by a number of entertaining and instructive examples, many drawn from the author’s own practice. Volume 2: Pawn Play discusses aspects of pawn play that are vital to successful chess, such as: Semi-open File, Isolated Pawn, Doubled Pawns, Backward Pawn, Hanging Pawns, Pawn Majority, Pawn Minority, Central Break. By drawing extensively upon his own games, Grivas is able to explain exactly what was going on over the board, and avoids the pitfall of providing overfamiliar, clichéd examples. This is part of a three-volume series that provides a wealth of instruction on many aspects of chess middlegames.

Chess College is an exciting new series of chess books to take intermediate players to new levels of chess understanding. New ideas are introduced and immediately illustrated by a number of entertaining and instructive examples, many drawn from the author’s own practice. Volume 3: Technique features topics including the central break, bishop vs. knight, standard sacrifices against the castled position, opposite-coloured bishops, and immobilization, and discussions on topics such as how to handle won positions and lost positions, and positions with small advantages, together with a wealth of training tips. This book completes a three-volume series that provides a wealth of instruction on many aspects of chess middlegames.

Good planning is central to good chess. A plan gives meaning to manoeuvres and tactical devices, forming a coherent whole that brings us closer to our goals. The modern understanding of chess planning has evolved considerably since the days of the “grand plan”, whereby a player might even try to map out the whole course of the game. Nowadays, top-class players appreciate that the opponent’s ideas also deserve respect, and our own plans must take them into account too. Modern grandmasters plan with great purpose but also flexibly, ready to adjust or even change direction completely when the situation demands it.

Grivas provides 75 superb practical examples where it is important to make the right plan. Once the critical position is reached, he guides you through the options and challenges you to find the right path.

How can you improve your chess? It’s not by chance that the top players say: ‘Study the endgame!’ This is because a great number of encounters reach the endgame, and studying these positions will teach you how to convert winning positions, and how to save or even overturn inferior ones. Moreover, it’s a well-known fact that studying endgames undoubtedly enhances other aspects of your play.

Practical Endgame Play is a comprehensive guide to all fundamental chess endings, and a godsend for those looking to improve their endgame play. Crucially, the emphasis is just as much on practical play as it is on theoretical understanding. Whenever an idea is introduced, Grandmaster Efstratios Grivas immediately illustrates it with a number of entertaining and instructive examples, a considerable number of which are drawn from his own over-the-board experiences.

This is a companion volume to Everyman’s earlier book Practical Endgame Play – Beyond the Basics, a work which specializes in more complex positions.

All book descriptions by Gambit Publications and Everyman Chess